The bolo tie has seen a recent resurgence in popularity. But when it comes to wearing a bolo tie, there is some debate about whether it is cultural appropriation.

Some argue that the bolo tie is a traditional clothing item for Western ranchers and cowboys. Therefore, it is not appropriate for anyone else to wear it.

However, others claim that the bolo tie has become a popular fashion accessory. So there is no harm in wearing one.

But is wearing this Western fashion accessory cultural appropriation?

Let’s take a closer look at the history and origins of the bolo tie to determine whether it has anything to do with cultural appropriation.

What Is A Bolo Tie?

A bolo tie is a piece of neckwear that consists of a cord or string with an ornamental clasp at the front. The cord is looped around the neck and secured with the clasp. 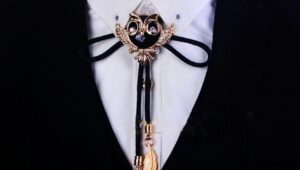 Bolo ties are typically worn with casual attire and are often associated with Western fashion. However, bolo ties can also be found in formal settings, such as business meetings or black-tie events.

What Is The History of Bolo Tie?

The bolo tie is a decorative string necktie originating from Native Americans. It consists of a cord with two metal tips and a sliding bead or knot that secures the tie around the neck.

The bolo tie first appeared in Wickenburg, Arizona, in the early 1900s. At that time, a local silversmith, Vic Cedarstaff, started giving them out as gifts to his friends.

Later on, the ties were also seen in ranchers and cowboys, who found them both practical and stylish.

This fashion accessory became popularized during World War II. The American servicemen stationed in the Pacific Theater began wearing them in the war.

After the war, it became a stylish accessory for men and women in the 1950s and 1960s. Today, many people still wear bolo ties as a fashion statement or a way to show their Western heritage.

Today, bolo ties are still associated with the American West. However, they have also become popular among people from all walks of life.

Is Wearing A Bolo Tie Offensive?

The history of the bolo tie is often used to support this claim. The bolo tie was originally worn by Native Americans, who were often forced to wear them as a sign of subservience.

In the early 20th century, the bolo tie became popular among cowboys and ranch hands in the American West. 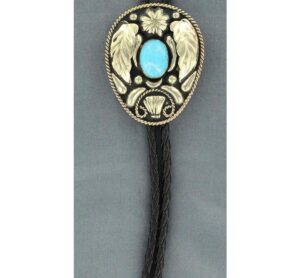 Again, many believe that the bolo tie was a symbol of oppression. This notion is mainly because it was often worn by those working in difficult and dangerous conditions.

Many now argue that the bolo tie is simply a fashion accessory with no cultural significance.

Today, it is no longer associated with any one culture or group of people. Ultimately, whether or not the wearing of bolo ties is offensive is up to the individual.

Overall, bolo ties may be considered fashionable in some circles. However, many believe that wearing one is quite rude and disrespectful.

The belief is that bolo ties are associated with cowboys and the Wild West. As such, they are not appropriate for formal or even semi-formal occasions.

Also, a significant argument against wearing a bolo tie is that it suggests a lack of regard for social conventions. In many cultures, it is considered polite to tuck in one’s shirt and to wear a tie when attending formal or business-related events. 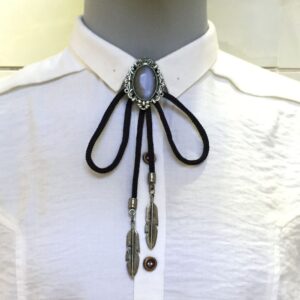 The critics of bolo ties believe they are too casual. This can send the wrong message in certain situations.

Of course, some argue that bolo ties can be worn in various ways and can be appropriate for any occasion.

Whether or not the bolo tie is truly rude or disrespectful depends on the context in which it is worn. Generally, it is best to avoid wearing a bolo tie to formal occasions unless you are certain it will be acceptable.

What’s The Right Way To go About A Bolo Tie?

The bolo tie is a surprisingly versatile accessory. Whether you’re dressing up for a special occasion or want to add a touch of western flair to your style, a bolo tie can help you achieve the perfect look.

But what’s the right way to wear one? Here are a few tips to keep in mind:

If you’re opting for a more traditional look, choose a bolo tie with an adjustable length. This will allow you to adjust the positioning of the tie so that it sits at the center of your chest. 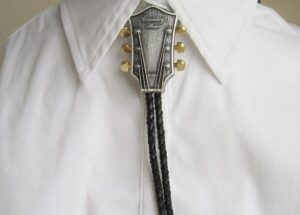 However, if you’re going for a more casual look, feel free to experiment with different lengths.

Bolo ties are typically worn with long-sleeved shirts. However, try pairing your bolo tie with a short-sleeved shirt or a tank top to create a unique look.

Once you’ve found the perfect bolo tie, it’s time to wear it.

In conclusion, bolo ties are a unique and versatile piece of fashion that you can use to enhance your look. Although their history is deeply connected to gangs and oppression, today, they’re favored by many.