Here’s What To Wear in Greece in January!

You’ve got a few days to explore Athens, Mykonos, and Rhodes—and you want to look your best while you’re there!

We know what it means to be jet-lagged, tired, and cold in the dead of winter.

But we also know that you don’t have time for a wardrobe overhaul.

So we’re here with some tips for how to dress for your trip without breaking the bank.

What to wear in Greece in January?

Greece is a beautiful place.

It’s warm, it’s sunny and the people are friendly. But if you’re planning on going there in January, you may want to rethink your wardrobe.

Because even though Greece is amazing in all seasons, it can be pretty cold in January, especially at night.

And while you might think that means you need to pack all of your heavy coats, scarves, and hats.

The truth is that Greece has its own weather patterns that make it much milder than most places in Europe at this time of year.

So instead of loading up on bulky layers, we recommend sticking with lightweight clothing that covers up but doesn’t weigh you down.

Or make you feel like a marshmallow when you’re trying to enjoy yourself after dark!

It is advisable that you bring along:

Long-sleeved or thermal t-shirts. These will keep you warm during the day, especially if you’re going to cold places like Meteora or Delphi.

You could also bring along long-sleeved shirts that cover your arms completely since they’ll protect you from sunburns and insect bites too!

Trousers/Jeans/Shorts/Skirts. Trousers that go up to your waist are best suited for this month because they provide more coverage than shorts or skirts.

But if you prefer shorts or skirts, then make sure that they’re not too short so that you don’t attract unwanted attention from locals or tourists alike! 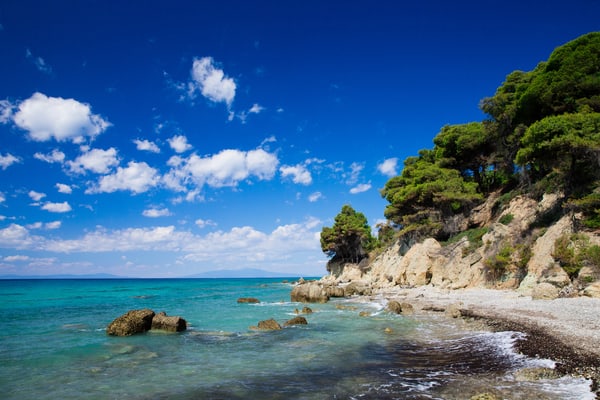 How cold is Greece in January?

Winter in Greece is not the best time to visit.

The weather can be unpredictable and temperatures are cool, with highs of around 10°C (50°F) and lows of around 4°C (39°F). It does rain a lot, but there’s also plenty of sun to enjoy.

The best time for winter travel in Greece is from April to June.

This is when it gets warmer and there are fewer tourists around.

However, if you’re looking for somewhere more remote than Athens or Thessaloniki, consider visiting from September to November when the crowds have gone home after the summer season and the weather is still quite warm.

The coldest months in Greece are January and February when the average temperature drops below zero degrees Celsius (32°F).

During these two months, there’s usually snow in the mountains too.

How do people dress in Greece in winter?

It’s not a good idea to wear shorts or a T-shirt if you’re visiting Greece in the winter.

The weather is usually cold and windy, so you should dress warmly in a jacket or sweater, long pants, and comfortable shoes.

In addition to what you’ll need for clothing, here are some other things to bring:

The sun can be very strong, even when it’s cold outside. A sun hat will protect your face and head from the sun’s rays.

You don’t need sunscreen in winter because it’s cloudy most of the time. But if there are sunny days, or if you plan on spending time on a beach during summer or early fall, sunscreen will protect your skin from sunburns.

If you’re going on excursions into the mountains or other high elevations in the winter, bring along warm socks to wear at night and in bed. Your feet will thank you for it!

What should you not wear in Greece?

Don’t wear shorts or mini skirts in the evening.

If you’re going out for dinner or drinks, you’ll want to make sure that your legs are covered. A nice pair of walking shorts or capris is fine, but don’t wear running shorts or anything too short.

It can be a bit cooler in the evenings, so if you’re going to an event where you’ll be outside at night, make sure to bring pants or capris for cooler temperatures.

Don’t wear flip flops in public areas like museums and shopping malls unless you want to look like a tourist!

The same goes for sandals without socks — they just aren’t appropriate anywhere other than the beach.

Don’t go barefoot anywhere other than on the beach or at your hotel pool if it’s not actually part of your hotel’s pool area (such as beaches with restaurants).

This includes restaurants and even sidewalks around town — it’s just not done here!

Does it snow in Greece in January?

It is not uncommon for there to be snow in Greece in January.

It is a temperate climate and there are many mountains around the country, so it can snow at any time of year.

There are many ski resorts in Greece, including those at Mount Olympus, Parnassos and Tymfi.

These offer skiing and snowboarding facilities as well as hotels and restaurants.

The best time to go skiing in Greece is from January to March when the weather is at its coldest.

What should I pack for Greece in winter?

Winter is the season of cold and snow, so you should pack some warm clothes. If you are going to Greece in winter, you need to be prepared for the cold weather.

Here is a list of things that you need:

You will need at least one jacket with a hoodie, which will keep you warm when it’s really cold outside. It can be windy, too, so make sure to have a jacket with a good hoodie and some long sleeves. Your trip will be much more enjoyable if you have an extra layer when needed.

There’s no better way to travel Greece, than at the beginning of the year. A small amount of snow, low crowd levels, and mild weather makes January a great time to visit!