Here’s What To Wear in Barcelona in January!

Barcelona is the capital city of the autonomous community of Catalonia, which is in Spain. It’s regarded as the second largest city in Spain and has a population of over 1.6 million people.

The cosmopolitan capital is known for its art and architecture. It is home to the iconic Sagrada Familia Church.

Barcelona is also famous for its other modernist landmarks which are designed by Antoni Gaudi dot the city.

There are many things that Barcelona is popular for and these include its amazing football team, lively nightlife, astonishing architecture, and sandy beaches.

The city holds a vibrant cultural heritage and also has many festivals which attract tourists from all around the world.

According to many people, the best time to visit Barcelona is between May to June, as the temperatures are pleasant during this time.

However, January is also another great month for visiting this beautiful city. This is because the crowds are usually less during this time due to the cold temperatures.

Regardless of where you’re going, the question of what to wear is always a concern.

If you’re planning a vacation to Barcelona in January and don’t have your outfits picked out, then you’ve come to the right place.

In this article, I’ll be discussing the ways one should dress when visiting Barcelona in January.

We’ll also take a look at the weather in this city during this time of the year. 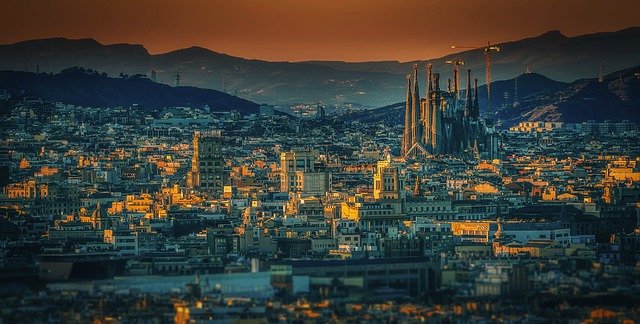 January is actually a great month to visit the city of Barcelona. Although it’s winter, the weather here is relatively mild and the days are sunny.

The temperatures even start to improve by the end of the month and you’ll see more of sunshine as well.

However, it may also be a lot windy during this time in Barcelona as it’s located on Spain’s northeast coast. It is these winds that make the weather feel much colder than it usually is.

Barcelona’s weather in January is relatively mild and the average temperature during the day is 13°C.

Whereas, the climate cools down at night and the temperature drops to an average of 4°C.

Moreover, one is also likely to experience a lot of rainfall during this time of the year in Barcelona.

This is why you need to be prepared before planning a trip to Barcelona in January as there’s a chance that you may come across rain on any given day during your trip.

However, January is actually a great month to visit the city of Barcelona because the crowds will be less and the airfares, as well as hotels, will be cheaper.

Apart from this, you’ll also be able to find good hotels available, which is highly unlikely if you visit this city during its peak months as it is quite a popular destination for tourists.

The low influx of tourists might make your trip all the more worth it!

What to wear for daytime activities in Barcelona?

There’s a lot one can do during the day in Barcelona. The city is known for its rich cultural heritage and historical sites.

You may spend your day exploring the beautiful city by visiting the Sagrada Familia church, the Casa Vicens, or the many museums that Barcelona has.

As all these places require one to do a lot of walking, my first suggestion for what to wear would be to carry a good pair of walking shoes.

These are so important as you would want to be comfortable while exploring the city of Barcelona. You could carry white sneakers so that they can go with most of your outfits.

The city of Barcelona is one of the most aesthetic and picturesque locations and therefore you may want to dress in vibrant colors to help make a statement.

You can opt for solid colored button-downs with a thick pair of blue jeans. Pair this up with a cross-body bag and some accessories and you’ll be good to go.

Other than that, you may also go for long sundresses and pair them up with leggings to help keep you warm during the winter time.

However, if you want to blend in rather than make a statement, then you may also go for neutral outfits or monochromatic ones.

For instance, beige pants with a neutral coloured bodysuit. You can accessorize it using belts and jewelry so that it looks a little fancier.

Moreover, you may also go on a hike or other adventurous recreational activities during the day. For this, you might want to keep athleisure wear Like tights and T-shirts.

Additionally, January is the month when it rains the most in Barcelona. There’s a high chance that you may come across a few rainy days during your trip.

So you should be prepared and therefore, carry an umbrella or a raincoat to help keep you protected from the rain.

What to wear for nighttime activities in Barcelona?

Barcelona is actually known for having one of the most amazing nightlife. There’s so much one can do, for example, watch the opera, or the flamenco show, or take a night bike tour.

The general idea is that you should be dressing up more during the night. You may even want to go to nightclubs and just spend the night partying.

However, it is going to be a bit chilly during the night, which is why I’d suggest covering up more to help stay warm.

You could wear ribbed dresses with leggings or velvet dresses with knee-high boots. You can accessorize it with belts and chunky jewelry to help make it look fancier.

During the night, one can also discover the urban art in Poblenou or visit the open air Cinema.

There’s also a great Los Encants Market, which you can explore to find local pieces.

If you don’t want to go for dresses and keep it casual, then you may go for long trousers with a sweater or a cardigan. This would also be perfect to take a stroll in!

Additional things you should pack for your trip to Barcelona in January:

I hope this article helped answer your queries regarding the way one should dress in Barcelona in January!