Every culture is beautiful in a unique way!

Different cultures have different customs and traditions that make them unique.

They are also used as a tool for storytelling, as they can be strung together to tell a story or history.

They were created to keep track of a woman’s fertility cycle.

The beads would be removed during menstruation and replaced once the woman become fertile again.

Waist beads also served as a symbol of femininity and sexuality. 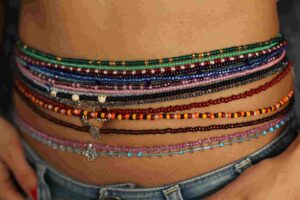 They were seen as a badge of honor, and only married women were allowed to wear them.

In recent years, waist beads have become more popular outside of Africa.

More and more women are choosing to adorn themselves with these beautiful beads.

However, some people argue that this is cultural appropriation.

What is Cultural Appropriation?

Cultural appropriation is the act of taking elements from another culture without permission or acknowledgment.

It often occurs when a dominant group takes something from a marginalized group.

This can be done without malicious intent, but it can still be harmful.

Appropriating another culture can lead to the devaluation of that culture as it can also perpetuate harmful stereotypes and misrepresentations.

The answer to this question is complicated.

On the one hand, waist beads are a beautiful part of African culture with a long history.

Wearing them is a way to show appreciation for this tradition.

On the other hand, many African women have been marginalized and oppressed.

Some people argue that it is inappropriate for non-African women to wear waist beads because they have not experienced the same struggles.

Ultimately, whether or not to wear waist beads is a personal decision.

If you choose to wear them, be sure to do so with respect for the culture they come from.

Some people argue that wearing waist beads is offensive because it appropriates African culture.

Others believe that it is a way to show appreciation for African culture and tradition.

Wearing waist beads or things that are important to a certain culture can be enjoyed by others only if they carry them with care and dignity.

No, it is not rude or disrespectful to wear waist beads.

However, some people may see it as cultural appropriation if you are not from Africa or if you do not understand the significance of the beads.

It is important to be respectful of other cultures and to research the meaning behind the beads before wearing them.

In conclusion, whether or not you believe wearing waist beads is cultural appropriation is a personal opinion.

There is no right or wrong answer.

If you do choose to wear them, be sure to do so with respect for the culture they come from.

What is the Right Way to Go About It?

The colorful waist beads have become the latest fashion, intriguing the masses, both young and old.

The appropriateness of donning such jewelry has been noted if you are not from African culture.

So, if someone is not “African” and wants to wear the waist beads, what is the best way to go about it?

Many argue that the only way to wear waist beads without appropriating African culture is if someone of African descent gives you them.

This way, you are not only aware of the meaning and significance behind the beads but also connected to someone who can teach you more about the culture.

Moreover, if you are not given the beads, another option is to do extensive research on the history and meaning of the beads before wearing them.

This way, you can be sure that you are wearing them with respect for their culture.

Ensure not to use them as a symbol of sexual promiscuity as that would be highly disrespectful.

Waist beads are a beautiful and sacred part of African culture.

If you choose to wear them, do so with respect for their history and meaning.

How Have the Waist Beads Evolved Over the Years?

The waist bead has evolved over the years, becoming more popular in mainstream culture.

They are now worn by people of all cultures and backgrounds, not just African women.

Waist beads can be found in various colors, sizes, and styles.

You can even buy them online!

Despite their newfound popularity, it is important to remember that waist beads have a long and complex history.

Before you buy or wear them, be sure to do your research and understand the significance of this cultural tradition, so you don’t end up offending anyone.

What do Waist Beads Mean?

For some, they are a beautiful and fashionable accessory.

For others, they hold more profound meaning and significance.

Moreover, in African culture, waist beads are often given to young girls by their mothers or grandmothers.

They are seen as a symbol of femininity and fertility.

Waist beads can also be used to ward off evil spirits or to bring good luck.

Some people believe that the meaning of waist beads has been lost in mainstream culture.

However, many people still wear them with pride and respect for their cultural heritage.

A simple thing like this one can make a big difference in how you connect with your culture and the world around you.

Remember, not everything is fashion! What may look like a simple fashion statement to some may hold a much deeper meaning for others.

Thus, ensure to find out in-depth about any new fashion, including the waist beads, before partaking in it!