The common English name for the Indian jewellery known as kamarband is a “belly chain” or “waist chain.”

They are also popular in African culture.

A sort of body jewellery worn around the waist is the belly chain.

Some belly chains are referred to as “pierced belly chains” because they are attached to a navel piercing.

They are frequently fashioned of gold or silver. Instead of a chain, a thread may occasionally be worn around the waist.

The chain could be heavy and thick or delicate and tiny.

For women, belly chains are seen as lucky in African and Indian cultures.

Recently, especially during the pandemic, the infatuation with body jewellery has returned. 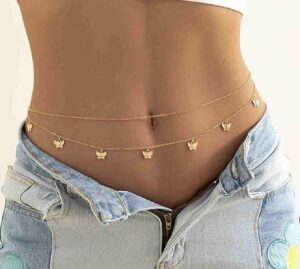 Do we understand the background of these jewellery items, and if so, should we ask ourselves if we are engaging in cultural appropriation?

People have been wearing body jewellery more frequently lately, especially now that limitations are beginning to loosen and we are free to flaunt our new ensembles in pubs, restaurants, and clubs.

It has become commonplace to see young people with body chains across their waists and crystal rings on each hand.

Waist chains have been used for at least 4,000 years, and they first appeared on the Indian Subcontinent.

In the past, both men and women in India wore waist chains as ornaments, as a part of religious rituals, as accessories, and to display wealth.

Waist chains appear to have been a very fashionable piece of jewellery based on the abundance of historical works of art from India that date to the Indus Valley culture.

According to a poem from the fourteenth century, men’s waist chains were popular in several regions of South India.

They are chains worn around the waist and abdomen that can have one or more strands and are composed of different types of glass, metal, crystal, bone, and wooden beads.

The Yoruba tribe of Nigeria is credited for popularising African waist bead chains.

There is evidence that these beaded chains were worn as early as the fifteenth century for a variety of reasons, including rites of passage and as a prestige symbol.

We must take into account the problem of cultural appropriation even though these accessories seem attractive and are a part of a current popular trend.

It is simple for us to fall prey to these harmful fashions, especially when online stores consciously increase their inventory of new and appealing jewellery pieces to entice us.

In addition, posing celebrities are often pushing new styles and have a significant impact on younger people. 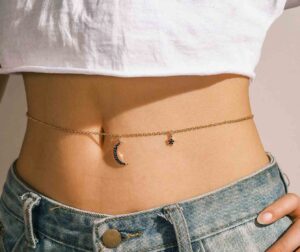 As a result, especially when we are uninformed and ignorant about what we are wearing, we are unaware of the potential harm we may be causing to communities and cultures.

In the end, everything depends on the subjectivity of the individual and their assessment of the pieces’ historical context.

The popularity of body chains can therefore be seen as the best way to appreciate a culture, as they are increasingly worn around the waist and can be constructed of hooped chains, threaded strings, or tiny beads.

Is it rude or disrespectful? What’s the right way to go about it?

There has been an upsurge in jewellery worn around the waist, frequently in the shape of hooped chains, threaded strings, or little chains.

Since waist chains have been worn for a long time and are a West African and Indian tradition, this has drawn controversy.

The significance of the chains comes from their representation of femininity, fertility, and sexuality.

It may be claimed that the West has now usurped this culture because we have created our own terms for waist chains, such as “belly chains” or “beaded waist chains,” and we no longer acknowledge the traditional significance of these waist chains in West Africa and India.

Some members of the West African community view wearing waist chains for decorative purpose as rude and inappropriate, while others think it is unnecessary even if you are not of African descent. 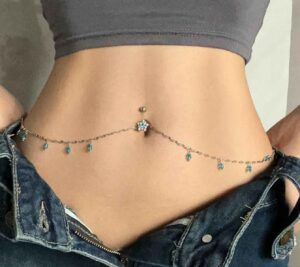 Although the definitions of waist chains and beaded waist chains may differ, some people view them as examples of cultural appropriation, much like they do with other types of body jewellery.

We must all ask ourselves whether wearing these many types of body jewellery is cultural appropriation or an appreciation of different cultures.

But wearing them merely for aesthetic reasons without knowing anything about them is cultural appropriation.

While wearing jewellery is ultimately a matter of personal preference, knowing the background of the pieces’ origins might give us a better perspective of whether we should or shouldn’t do so.