There are many Viking hairstyles which are worth noting and one of them are the Nordic braids, commonly known as the Viking braids.

One could say that braids have been a part of life in many cultures for several centuries. They have a long and rich history and hold a lot of cultural significance.

Almost everyone once in their life has worn braids, regardless of their type, and we know that there are several styles in which braids can be made.

However, people are now starting to become aware of the concept of cultural appropriation. 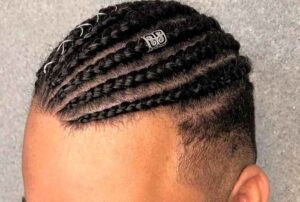 There are many braids that originated through different cultures, for instance, the African culture, and people casually style their hair without realizing that they may be hurting sentiments.

One such case is with the Viking braids, as people aren’t sure whether it falls in the category of appropriation or not.

If you’re curious to find out if this is true or not, then you’ve come to the right place. In this article, I’ll be discussing the history related to Nordic braids and we’ll also take a look at whether it’s appropriate for anyone to wear them or not.

So let’s dive right in!

Viking braids are a common Nordic Viking hairstyle. It’s made by braiding the top section of your head. The hair then is fishtailed or French braided.

Viking braids can be made on either men or women. Many people even opt for shaving the sides of their head and then making a twisted cornrow or flat braid.

Viking hairstyles, especially braids, originated 1200 years ago and there is evidence that these styles lasted between 793 to 1066 AD.

What are the Vikings? This is a term which describes North Germanic people. They’re also commonly referred to as Scandinavians or Nordic people.

According to the medieval context, they’re even called the Norseman!

The Viking braids is an iconic hairstyle which was commonly worn by warriors and soldiers while they were invading territories. Therefore, it can be referred to as a military style hairdo. 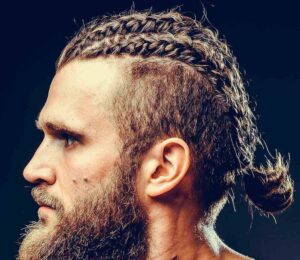 After almost a 1000 years, Viking hairstyles are still very popular. They even grew in popularity after a lot of Viking series came out, for instance The Game of Thrones.

These braids hold a lot of value and are representative of more than just a hairstyle.

This hairstyle is a high and tight one, therefore it allowed warriors and gladiators to fight battles easily.

The braids allowed flexibility in putting on and removing the headgear as well as the chest plate armor.

As the hair was tightly braided, it prevented soldiers from getting distracted and also prevented their vision from getting compromised while fighting.

Therefore, Viking braids isn’t just a hairstyle but it was a benefit which allowed the Vikings to conquer Nordic territories easily.

Viking braids are known for having a rich cultural history as well as significance. The braids have their own place in time and have allowed for warriors to conquer places.

However, it has become a popular hairstyle for many people after they get inspired by nordic warriors in series that have recently been released.

This is where it gets a little messy! A lot of people believe that wearing Viking braids is considered cultural appropriation.

This is because these braids hold a lot of value and meaning behind their origin. People believe that normalizing them would make them lose this value.

But this disappoints many people who are actually inspired by this hairstyle and want to wear it without offending anyone.

So after a lot of research, I came to the conclusion that wearing Viking braids isn’t cultural appropriation. 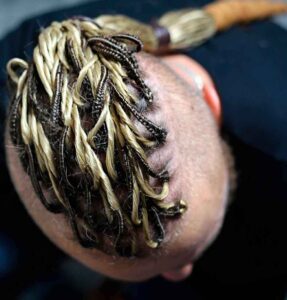 As mentioned earlier, this style recently caught attention after some significant Viking series were released. After which people started copying the hairstyle.

Although I can’t speak on behalf of everyone, from this perspective, it seems as if people are appreciating the braids rather than appropriating them.

If you’re someone who’s wearing these Viking braids because you like how they look then I believe that it’s completely alright for you to do so.

Therefore, to answer the main question, wearing Viking braids isn’t offesnive even if your culture didn’t have them as a part for centuries.

However, it only becomes offensive when you’re making these braids to mock someone’s culture or to imitate them. This is where it’s wrong and shouldn’t be allowed!

At the end of the day, it all comes down to what your intentions are when trying to wear something that is a significant part of someone else’s culture.

The only way that wearing Viking braids would be disrespectful is when you intend it to be. Otherwise, you may wear your hair as you wish.

In fact, there have been many times where people from specific cultures actually encouraged others to wear elements from their cultures.

This allows for unity and empowerment and also helps their culture achieve the recognition and appreciation that it deserves. 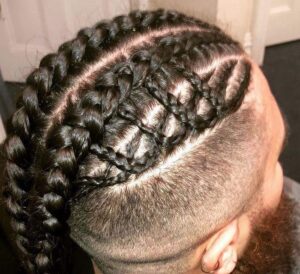 If these braids are worn to shame someone, to imitate them, or to mock them, then that’s where it’s regarded as disrespectful.

Moreover, there have been many cases where brands or big names in the industry have copied elements of others’ cultures and profited off of them.

This leads to these elements becoming normalized and losing their value, which is why people believe it to be cultural appropriation.

You can’t expect people not to react when others blatantly copy their culture!

Viking braids are a specific hairstyle but can be made using different types of braiding techniques. These include fishtails, french braids, or cornrows.

However, a few things should remain the same like it starting from the top of the head and ending in a ponytail.

Most importantly, the right way to go about it would be by educating yourself about the history of these braids before you go onto wearing them.

This is highly important for you as this would allow you to appreciate someone’s culture without unintentionally offending them.

If you’re still unsure then the right thing would be to have conversations and interact with people of the culture you’re inspired by.

Having knowledge and different perspectives would allow you to become comfortable with many things in life.

I hope this article helped answer your queries regarding Viking braids!