Within the era of globalization, many local traditions and practices are being adopted by people all around the world, not just the natives.

This could be seen as a loss of diversity by some, and a form of appraisal, tribute and celebration by others.

There are a lot of things that have been adopted and spread by the international community and spread into their own societies.

These include food, garments, accessories and different forms of customs and practices.

Grillz fall under the same category and can be viewed as a form of cultural appropriation of the black ethnicity by the whites.

It is not the first time that they would have taken a tradition other than their own and manipulated it to suit their ways.

So what is it that enrages blacks when they see members of other communities wearing grills?

And is it really a form of cultural appropriation?

What would seem like a part of hip-hop culture, the history of grillz actually falls way back into time, into a pretty diverse lineage and geography.

Evidence suggests that they were first used in Giza, Egypt, dating in the Before Christ era. However, a stronger theory lies in Italy where they were worn by the Etruscans and various samples have been found. 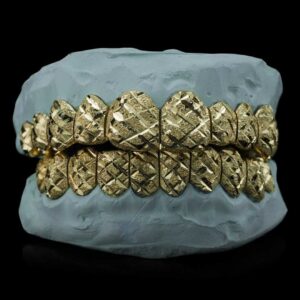 This tradition continued in different parts of the world, particularly the ruling elites of the time. These included the Mayans and the ruling ladies of the Philippines, where they were a symbol of luxury and wealth. Some even thought, wearing grillz brought good luck.

Grillz were worn in a number of ways, but the first and foremost grillz were just plated gold. Later diamonds and precious gemstones were encrusted, to adorn them and make them more fancy.

In some families they were passed down as family’s heirlooms from generation to generation. Kind of gross, but ok.

It wasn’t until the 1980s that the grillz were worn by the hip hop stars, predominantly by black rappers and hip hops stars. Gradually, they started stepping into mainstream fashion and street wear and the rest is history.

It could be seen as a form of cultural appropriation since if it wasn’t for the back group, the grills trend might have been lost forever.

However, wearing grills doesn’t originally have roots in the black culture, which might come as a strong point for debate.

In recent times, the grillz trend has belonged to the black people. It was a product of their creativity which was adopted by leading brands, with or without their consent, one can’t say.

In many cases, such trends when adopted by whites, they would be appraised and appreciated for being unique and daring. 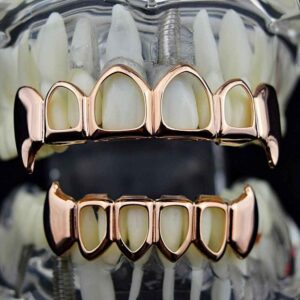 However when worn by people of color, the people to which the style originally belonged to, they would be have to face stereotypes and be accused of being gangsters and thugs.

They would lose their jobs for the same very reasons. If the black members of your society see wearing grillz as offensive, then they have every right to do so.

It all depends on the intentions of the wearer, really. Many people would wear them just to spite their colored neighbors. Others just want to add that bling in their appearance.

The fact that as a non black person wearing grillz you would be appraised while your colored fellows are called out for the same reason, could definitely be seen as discrimination. However, this would be more of a social matter rather than a racist individual one.

Many celebrities are wearing grills, some of black origin and some who are white, and they are getting grilled for the same reasons. It’s not that the whites aren’t allowed to wear it, it’s just a black culture thing and wearing them without knowing what they represent, could be a deal breaker for many.

Normalizing cultural appropriation should be another thing up for debate where many traditions are picked up and manipulated without the locals’ consent. 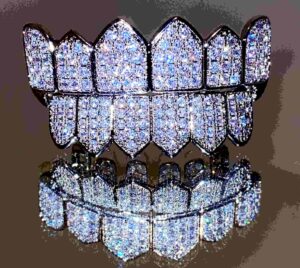 However, the fact that we live in a globalized world and are witnessing a converging of cultures and interests. Many perceive it in a positive light, as a celebration of unity and brotherhood. It’s just a matter of perception at the end of the day.

Grills can be found in various shapes and styles where you can pick one that you like best. There are single tooth caps, partial front row covers, and canine caps, as well as plenty of others for you to choose from. You can also opt for gap covers which is a convenient way to hide an insecurity.

Some will be just plain metal caps others will have diamonds encrusted in them, like honey combs grillz which will obviously be more expensive.

How To Wear Them Properly

One of the thumb rules that you’ve got to remember when it comes to wearing grillz is always wearing them according to your size. 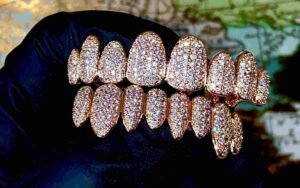 Make sure they fit perfectly. Have an appointment with your grillz manufacturer, get a mold made, and get your grillz according to that size.

Avoid eating and drinking while wearing your grillz. If you must, then don’t eat anything sticky or crunchy as it is harmful to both your teeth and your grillz.

Wearing grillz doesn’t necessarily mean vanity, or implying a rich lineage. While it could be used for such purposes, the most recent trend that saw the rise of grillz was the hip hop culture, which wasn’t confined to the black culture.

If you have decided to wear grillz, then be prepared to face some criticism. It doesn’t matter what intentions you hold in your heart. The practice of adopting another’s culture for one’s own pleasure has pretty much ruined the image of cultural reunion, and nice folk aren’t exempted from it.

While many may praise you for being daring others might see you as a monster and slanderer of cultures. All you have to do is keep shining on through that grillz smile of yours.