Henna is a plant-based dye which is used to create beautiful temporary body art. It’s usually used for creating designs on the hands and feet in many cultures.

However, it can be used for many other things as well, for example, to dye your hair, color your fingernails, and it’s even used on fabrics like leather and wool.

It’s very often that one is sifting through social media pages and come across beautiful and intricate henna designs.

This serves as an inspiration to get henna for themselves.

However, the world is becoming more aware of the concept of cultural appropriation.

People are cautious before wearing anything that might offend someone’s culture. 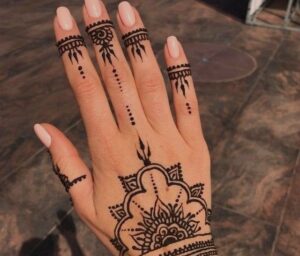 One such case is with wearing Henna, as it’s a huge part of many cultures. Now that cultural appropriation is understood, people are afraid that wearing henna falls in that category.

Although, they aren’t sure whether it does or not. If you’re one of these curious people, then you’ve come to the right place.

In this article, I’ll be discussing the history related to Henna and we’ll also take a look at whether wearing henna is cultural appropriation or not.

The art created by henna is known as “mehendi” in Urdu and Hindi. This art form has been practiced for thousands of years in many countries, including Pakistan, India, Africa, and the Middle East.

Originally, henna was used as a soothing paste as it’s known for having natural cooling properties.

Henna is made out of the henna tree also called the Egyptian privet. This herb plant has been used to create art for centuries now.

Soaking one’s hands and feet in henna paste was commonly practiced in many cultures as it helped refresh the bodies.

However, this process used to leave a stain on the skin’s surface and this was used as inspiration to create henna designs.

Henna designs then became very popular in various cultures and everyone could be seen adorned in intricate designs, regardless of their status.

This practice is most commonly done during weddings amongst muslims and hindus. The brides wear an extremely heavy henna design for their big day.

While the bridesmaids and everyone else also gets various designs done on their hands and feet.

Apart from weddings, henna is also worn for many other traditional occasions, like Eid for muslims or Raksha Bandhan for hindus.

In today’s world, there are many henna artists who have mastered the art of henna designing.

Henna as a custom holds a lot of cultural significance for the hindu and muslim community.

It’s commonly believed by them that the love in the marriage can be depicted by how dark the color of one’s henna is.

Although it should be noted that today henna has made its way into the American community as well, with stalls and pop-ups at festivals.

Apart from its cultural significance, henna is also worn as a part of fashion. Many celebrities, like Rihanna and Ariana Grande, can be seen openly supporting traditional henna designs.

This led to the rise in popularity of henna designs in the world and everyone can be seen wearing henna.

However, as henna is a part of many cultures, the question of cultural appropriation always arises. 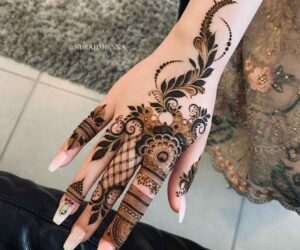 Although I can’t speak for everyone, I don’t believe that wearing henna is cultural appropriation.

Unless and until, it is being done out of sheer appreciation for this art, there’s no harm in wearing henna. It’s beautiful and loved by many people.

Even though it’s a part of many cultures, that doesn’t make anyone or any community the only ones who are allowed to wear it.

In fact, people of many cultures actually encourage others to get henna done as a part of cultural sharing.

It helps make the world a more united place and many people are proud of sharing various elements of their culture with others.

To answer the main question, no it’s not offensive to get henna done even if it isn’t part of your culture.

The only way it becomes offensive is when someone is getting it done with the intention of disrespecting the artform or imitating someone else’s culture.

However, I can’t think of any situation in which wearing henna could be seen as disrespecting someone’s tradition. 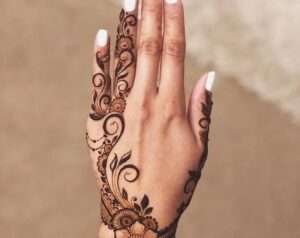 Henna became popular in the world as it’s a painless alternative to tattoos and it’s also a more accessible one. Plus, they’re temporary!

Although it should be noted that there are many brands that rip off cultural traditions and start profiting off of them. They normalize a custom to the point that it loses its significance or value.

In situations like these would wearing henna be considered as offensive or culturally inappropriate.

Otherwise, if you’re wearing it because you like it, then there’s nothing wrong with that!

Wearing something that isn’t a part of your culture all comes down to what your intentions are behind it. Something like henna has been practiced in many cultures for centuries.

It only becomes disrespectful when one intends it to be. If you’re wearing henna to shame someone, make fun of them, or just to imitate them, then that’s where it becomes wrong. 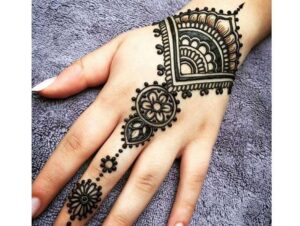 Otherwise, there isn’t anything disrespectful about wearing henna in my opinion. Henna is used to create beautiful designs which leave a brown-red stain on our hands.

It looks lovely and inspires a lot of people to get henna done. Therefore, unless and until it isn’t done to mock someone, it’s completely alright for you to wear henna.

There isn’t exactly any right way to wear henna. There are many designs which are available in henna and people get it done on various parts of their bodies.

Therefore, you can get any design created on your hands, feet, back or wherever you want it. It’s completely up to you!

You should leave your henna on for as long as it’s possible for you to, as this would lead to a darker color. The stain that henna leaves looks beautiful.

Moreover, if you’re still worried about offending someone, then the right thing would be to have conversations and interactions on the topic.

This would give you a better understanding of this custom and different perspectives. I hope this article helped answer your queries!