A lei is a wreath of flowers that are commonly worn in Hawaii, and the Philippines region.

It was a custom in these lands where people who visited the places were given these garlands when they entered Hawaii as well as on their departure.

The practice is still carried on today where you can arrange a native of the land to receive you with a lei as you step into Hawaii.

They have become pretty common within the US, where leis and the Hulu culture can easily fall under cultural appropriation where they are often used in thematic parties.

While it’s good to celebrate diversity and may be an acknowledgment of Hawaiian culture, disrespect becomes an easy feat when you don’t know the purpose behind it and what it was initially used for.

So, what is the purpose behind leis?

And how did it come to be in the first place?

Leis were originally worn by native Hawaiian people to show their ranks and respect to one another as well as their gods. 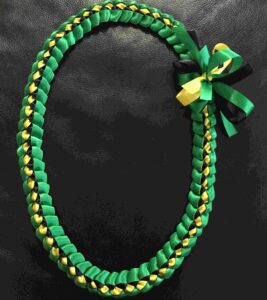 It has a spiritual context and background where the tradition of making and wearing leis has continued ever since the natives arrived in the land.

Giving them to someone often symbolizes their positive emotions towards the person they are giving it to, like love, respect, affection and friendship.

In Hawaii, they are often given on special occasions like weddings, birthdays, funerals and graduations and symbolize many emotions. The representation of the sentiments concerned with the gift of leis is often associated with the material they are made of.

In Hawaii, you can find leis literally everywhere, made of different flowers and the input of different beads, where each element has its own significance in the making of the wreath.

Leis can include seashells and seeds and bones of different animals. A lei made from kukui nut is particularly popular and was originally used to represent royalty.

It is still given nowadays to show respect and is often given to tourists in Hawaii. Carnations are often given in love as well as the ilima flowers, and orchid leis are used to welcome guests ranging from colors purple, green and white.

Hawaii is mostly seen as a favorite destination spot for many American tourists, to lay off some heat from their otherwise busy and fast paced lives, and its own identity is often subordinated. 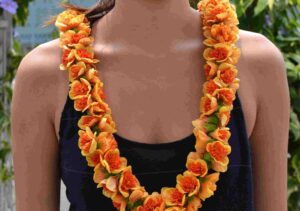 Much of the Hawaiian traditions are often used just to get a kick out of it at parties including the Hula dance and leis, and becomes a perfect example of cultural appropriation.

This kind of disrespect is often accompanied with lack of knowledge of the tradition and leads to ignorance of the sanctity of its origin, hurting the sentiments of people it belongs to.

There may not be much harm in wearing leis, and have become quite common in the and some parts of Europe, if the matter is taken with more precaution.

Wearing a lei can lead to cultural appropriation and disrespect if not gone about the right way. At many culture-themed parties you will see that plastic or fake leis are passed out and given to guests.

They are worn as a piece of adornment representing Hawaiian culture so that none of the guests feel left out.

This proves considerably cheaper for the hosts than original garlands of flowers but end up hurting the tradition in the process.

This is not the way to go about lei or any of the proceedings of the native Hawaiian people. Although lei can be worn at any given time, you will still have to take care of a few things to ensure it doesn’t lead to disrespect.

The fact that America once tried to impose taxes on the people living in the Hawaii territory and the resulting rebellion in return just adds to the whole theory of using their culture on purpose, in a not so caring way.

You would think that Americans would be considerate when adopting another culture for their own use which is an offense in itself.

However, there is not much difference to be seen in the majority of Americans who still use lei and hula dances in a rather careless way.

It’s been used for so long that the native Hawaiians have just accepted the use of their traditional lei by the Americans.

This also pertains to their generous nature, and still carry on their tradition of welcoming gestures of giving lei to tourists. They haven’t restricted any laws on their culture on who is appropriate for using it or any specific day, time or place.

However, there are a few guidelines you may need to keep in mind so that you are able to give and wear the lei as per the Hawaiian custom and ensure your respect to them and their culture.

First of all, make yourself knowledgeable about the lei custom. Since leis made of different material symbolize different emotions and therefore should be given accordingly.

Many people wear leis for good luck which is also completely fine, and they have become quite common during graduation ceremonies.

One of the integral rules of the lei tradition is that you never ever refuse a lei when it is being given to you. You should also never take it off in the presence of the person who gave you the lei. 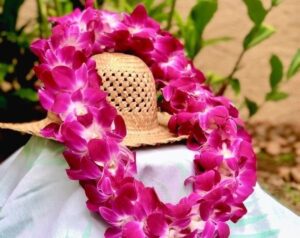 If you must take it off due to some reason, place it somewhere respectful. When gifted with a lei, bow and kiss both cheeks of the person who gave you the lei.

When giving a lei to a pregnant woman make sure it is an open ended one since a closed lei symbolizes the umbilical cord tied around the baby’s neck. Basically, bad luck.

Avoid wearing the lei you intend to give someone else, since it is known to bring bad luck. The proper way of wearing your lei draped on both sides of your shoulder. However you can also wear it as a necklace or on the side, on the right if you are single and on the left if you are married.

Preserving And Disposing of Your Lei

Preserve your lei in a plastic bag and place it in the refrigerator to keep it moist and allow it to last longer. Avoid putting your lei in the freezer as it won’t last longer, only damage the petals within the process. 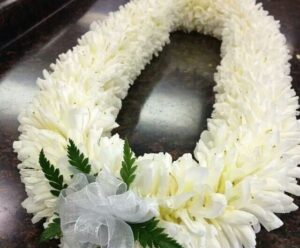 A lei made of natural flowers will last about 5-6 days, if taken care of properly. When the time comes to dispose of it, do it properly. You can hang it on a tree, bury it or burn it so that it may return to the Earth.

In the end, it all depends upon educating yourself about the right way of wearing the lei, its customs, and the context it is used in. Wearing a lei is appropriate for any time and place, and does not require any occasion for you to wear it.

You can also buy one for yourself, which is known to bring good luck. Just make sure you adhere to the rules so that you don’t hurt Hawaiian feelings or your image in the process.