Is Koi Footwear Legit? Is It Ethical? (+FAQs)

Koi Footwear is a vegan footwear brand. This means they don’t use a material that is derived from animals such as leather in their footwear.

However, is the quality of the material used in making the products of Koi Footwear good? Is Koi Footwear reliable i.e. do customers get what they order? 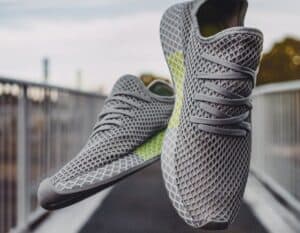 In this article, we have described whether Koi Footwear is legitimate and reliable or not.

We have also answered some of the questions you might have about the legitimacy of Koi Footwear. Keep on reading to find out!

Koi Footwear is a 100% vegan footwear brand. They mainly sell footwear for both men and women.

The stores of Koi Footwear are present in more than 30 cities around the world.

Koi Footwear also sells online through its website. Koi Footwear has a huge fan following on its social media accounts.

For women, Koi Footwear has footwear items such as sandals, boots, loafers, ankle boots, and trainers. They also have shoes according to different aesthetics such as Kawaii and Goth.

Some of the clothing items include hoodies, trousers, t-shirts, jackets, etc and accessories include necklaces, bags, jewelry, socks, sunglasses, etc.

The name ‘Koi’ comes from a Japanese word that means ‘love’. This shows the love of the founder for footwear.

Koi Footwear was initially manufactured in a factory in Manchester. But when the demand for their footwear increased, the brand decided to transfer its manufacturing process to China.

Now the products are designed in Manchester while they are manufactured in China. Koi Footwear has mentioned on its website that they ethically source their products.

The main thing that makes Koi Footwear unique and famous is that they are a 100% vegan footwear brand. They don’t use leather or any other material that is derived from animals.

Koi Footwear also claims to be eco-friendly. They use boxes that are made of recycled and recyclable cardboard. They also use paper bags instead of plastic wraps for their shoes.

Koi Footwear is an average-quality brand.

Koi Footwear doesn’t use traditional materials such as leather to manufacture its footwear. Instead, they use 100% vegan material in their footwear.

Most of the customers who reviewed Koi Footwear have complained about the quality of their footwear. On Trustpilot, a customer gave 4-star ratings to the brand and wrote that;

“They’re beautiful shoes, however, one of the chains has already come off the shoe and hangs loose. Koi need to up their quality with their shoes.” 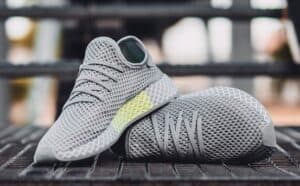 Some customers also mentioned that they received shoes of high quality. Here’s a review of one customer who seems to be satisfied with their footwear;

“The shoes are of incredible quality, I’ve bought from here not once and every time I’m astounded by them :)”

Koi Footwear has an average 4.3 rating by more than 16k customers on Trustpilot. More than 70% of people have rated it as an excellent brand.

A customer gave a 5-star rating on Trustpilot and wrote that;

“Ordered shoes for my daughter, they arrived promptly, fitted well-very much true to UK size and look great, she’s pleased with them! Also a good range of alternative footwear to choose from.” 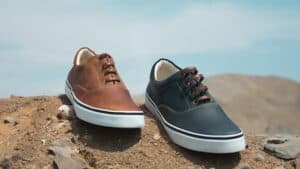 Koi Footwear is a 100% vegan brand. This means they don’t use leather or any other animal material while manufacturing their products.

Moreover, Koi Footwear has mentioned on its website that they ethically source their products and stay in contact with their manufacturers to make sure they are fulfilling the rights of their workers.

Koi Footwear is also an eco-friendly brand. They use recycled and recyclable cardboard for their shoe box. They also use a paper bag instead of a plastic bag.

As Koi Footwear is an animal-friendly and eco-friendly brand and takes care of its workers, hence it is an ethical brand.

Where Does Koi Footwear Manufacture Its Footwear?

Koi Footwear used to manufacture its products in Manchester. But when the demand for their footwear increased, they transferred their manufacturing operations to China.

The customer reviews of Koi Footwear are positive on different review sites. 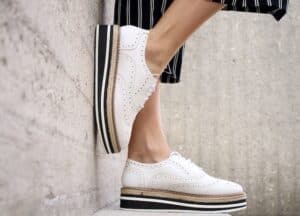 Other than that, Koi Footwear is an ethical brand as they are eco-friendly and animal friendly and are also conscious about the rights of their workers.