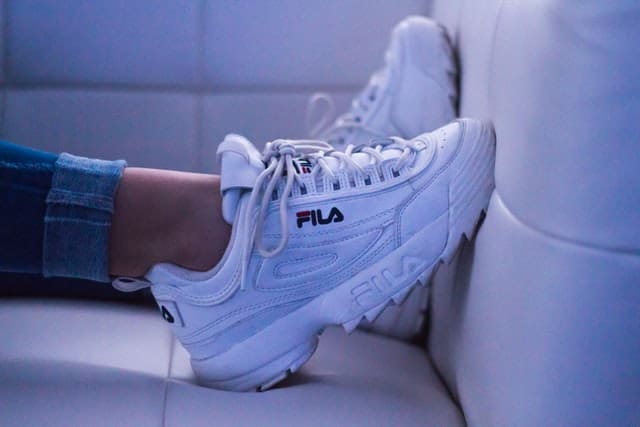 Is Fila a good brand? Is It High End? (Plus Other FAQs)

With its foundations in men’s, women’s, and children’s underwear, the company entered the sportswear market in the 1970s, offering useful clothes and accessories for various physical activities while also supporting prominent athletes.

It was a concept that worked well for Nike and Adidas, but FILA eventually faded away. During 1997 and 2007, sales plummeted by approximately 91%. Yoon Yoon-Soo, a former FILA employee in South Korea, bought the business for $400 million in 2007.

In comparison, Nike and Adidas had yearly revenues of $16.3 billion and $12.5 billion, respectively, at the time.

After 2007, FILA was able to get out of a bind thanks to a combination of strategy and simple luck, with a slew of global macro factors accumulating in its favor.

The first was the emergence of the athleisure industry, which, as per Allied Market Research, was worth $155 billion in 2018 and is anticipated to reach $257 billion by 2026.

Then followed the retro movement, fueled by nostalgia for old companies and the culture of the 1990s, notably hip-hop. FILA has a long history with Tupac, Run DMC, and Biggie Smalls. Then came Gen Z, who embraced ‘ugly’ clothing and accessories.

Is Fila a popular brand?

The company’s founders, two Italian brothers, were rigorous regarding detail, guaranteeing that each item was perfect. As a result, the brand multiplied following its launch. And before long, the family business’s sales had carried it beyond the borders of its homeland.

Italy and high fashion were, and continue to be, inextricably linked. In the 1940s, however, there was a huge inequality in the sports sector, and players had few options.

Within two years, the brand united with Fratelli Fila, seeing its potential. This collaboration brought the two corporations closer together and contributed to the start of a direct invasion of the industry.

Before the 1970s, the sports market grew significantly more competitive. And before long, the brand found itself in a situation where it needed to make a critical decision in order to continue to succeed.

That is why the company chose to recruit Enrico Frachey in 1968. As a result, Fila began their entrance into major sports sponsorships by dominating the tennis world. Although they gained some notoriety as a consequence of this, it was only temporary. The brand didn’t appear to be progressing.

Fila may appear to be less important and niche when compared to competitors such as Puma, Reebok, Nike, Converse, and Adidas. This may be true, but they are far from being a little company when it comes to real figures!

Their quality is exceptional. They provide exceptional comfort, durability, and support for running and other athletic activities.

They’ve also kept their status as a brand that represents real European sport and elegance. Fila is dedicated to its legacy sport, tennis, and is a frequent sponsor of ATP tournaments and Grand Masters across the world.

Is Fila a high-end brand?

Fila’s well-known collaborations with companies like BAPE have helped it stand out from the competition. Fila has benefited from these agreements by gaining awareness and fashion cred among a younger audience, as well as expanding its reach into the streetwear sector, a profitable niche aimed at Gen-Z customers.

Fila has kept an eye on the ball and an ear to the ground in order to maintain its expanding popularity and compete with other large sportswear players. If they can evolve in tandem with evolving customer wants and environmental restrictions, they will be able to endure as a brand.

Despite this, Fila’s signature red, blue, and white color palette will continue to draw attention as a timeless and iconic design. It will never lose its attraction, just as it quickly surged to the forefront of desired wardrobe selections when the 90s resurgence began.

Is Fila owned by Nike?

When it relates to Fila’s most famous footwear, their Disruptor II chunky shoes and their gigantic platform sneakers lead the way.

Their low-top Fila shoes are right behind the iconic Fila sandals as the second most popular style.

This model is an upgraded version of the brand’s original sawtooth sneaker, which was debuted in 1996 and was so successful that Footwear News awarded it “Shoe of the Year” in 2018!

The Disruptor II’s most recognizable features are its chunkiness and zig-zag platform sole, as well as the F logo on the tongue. They’re considered unattractive shoes, which may be why Gen-Z ladies prefer them to Chuck Taylors or Vans.

The Mindblower, a 90s Fila throwback sneaker, was recreated alongside a range of artists and designers as part of the brand’s huge return relaunch. Kinfolk magazine, Marcus Troy, and Pink Dolphin were among those who worked on it.

A wide assortment of gear, including graphic shirts, hoodies, jackets, fanny packs, and baseball hats, was released to coincide with the debut. So no, it’s not owned by Nike.

Their success has been based on reinterpreting their brand’s history and legacy. Rather than flowing with the flow and adapting rising fads that come and go at breakneck speed, Fila has concentrated on utilising the continued 90s fascination and refining their brand’s approach to emphasise their century-long legacy.

As you may see, Fila has progressed through each step of its growth as a company. Fila initially faced backlash following its first success, and it stayed a minimal brand for quite a while.

Fila has made a resurgence in the previous decade and has been going strong for longer than five years, despite being an underappreciated brand for most of its existence.

Despite not being able to carve out a niche in the industry until lately, they have always offered sportsmen and fashion icons with high-quality footwear and accessories.

One of the key reasons why the firm is considered an excellent brand is its ability to take a chance and turn things around.