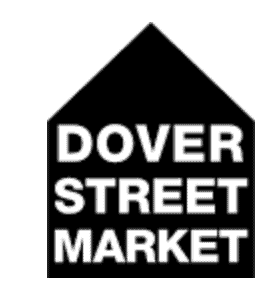 Dover Street Market is a platform for high-end luxury clothing brands. It is widely famous for its wide-span cross-community shopping concept. Think of it like a multi-ethnic, global e-bazaar.

In desperate times, such as during this pandemic, it has totally overturned the retail industry. Dover Street Market has been revolutionizing the way we shop for nearly eighteen years now.

Dover Street is more than just a high-end multi-brand merchandiser and distributor. Over the years, the Dover Street Market has become a symbol, an expression of individuality. It is a family of devout and loyal worldwide customers.

In ancient times humans needed clothing as just a necessity, but in the 21st century and especially for our generation, clothing means art. Dover Street market does just that; it unifies art and fashion.

“We wanted to appeal to everyone who wanted a new, inspiring, invigorating shopping experience, without borders and definitions,”

Who is Dover Street Market Owned By?

The idea of Dover Street Market came to life in 2004 by Rei Kawakubo, a Japanese self-taught fashion designer- who was one of the most inspiring designers of the 20th century.

She founded the Comme des Garçons (CDG) in 1969 in Paris. She is often described as a prophetess of serenity and grace. She transfigured the fashion industry into a higher-order with her unconventional taste and saved it from the flames of its trivial ways.

Today, she is seen as a sophisticated presence whose knowledge far exceeds ordinary men. A symbol of feminism.

Her spouse, Adrian Joffe, the president of Comme des Garçons International, acts as the binding agent, the glue, or the mediator that connects the thoughts of Ms. Kawakubo to the rest of the world.

The psyche and presence of this great artist can be understood by her own words,

“I felt the only way to do something new was to try not to make clothes.”

After the manifestation of their idea, the fashion and retail industry would not be the same.

Kawakubo and Joffe took a very uncommon approach while setting up their own place, in contrast to ordinary retail stores.

Its target audience includes well-off individuals with a distinct taste in art and outstanding outfits irrespective of budget.

In addition to its out-class Dover Street merch, Dover Street Market also gained popularity because of its magnificent and aesthetically-designed buildings and its sharp-looking, multilingual, professional French-Esque store personnel.

Starting from a single store in London, the DSM bug spread like an epidemic and soon infected the hearts of fans worldwide.

From New York and Los Angeles to Beijing, Tokyo, and even Singapore, they even established a Parfums Market together with a Little Market in Paris.

No one could resist Rei Kawakubo’s “beautiful chaos”.

Why is Dover Street Market so Revered?

Because Dover Street Market is the first of its kind. It is one of the very first concept stores ever.

What is a concept store? A concept store is a place that sells not only products but also ideas, it promotes a certain kind of lifestyle that is capable of appealing to the masses.

The fun thing about DSM stores is that they close twice a year to be renovated completely. The owner believes in the concept of new life; she believes in the enhancement and betterment of the previous self.

In Dover Street Market, nothing is predetermined, the ideas are randomly thought out so that the final product is something that exceeds the expectation of the viewer.

Rei designs these stores herself and encourages people with the potential to join her cause for these artworks. Overall, the result can be best stated as rigid yet elegant.

There is a certain beauty in Kawakubo’s inventions that makes even the most simplistic and monotonous things appear beautiful.

The products in Dover Street Market range from glamorous to streetwear. It is a place where experienced artisans meet newfound artists, and together they work to create something astounding.

The experience at DSM focuses not only on buying or selling but rather an appreciation of the art behind the product.

What makes their international shops exceptional is that they are all distinguished from each other.

Each shop has its own characteristic design that is totally different from the other, and while all the shops have similar products, each DSM shop in a different country has specific articles for that country.

In an interview, Joffe has perfectly described this concept of Dover Street Market, saying,

Dover Street Market has been in the game since 2004 since then it has become a center for cultural exchange, a podium for art and fashion, and a checkpoint for many influencers.

This avant-garde boutique store reported $130 million in revenue -a total from five of their stores.

With the ongoing pandemic, the market also suffered losses but it quickly overcame these.

How long does Dover Street Market take to process?

Dover Street Market uses FedEx as its delivery agent. They operate from Monday to Friday from 9 am to 7 pm EDT.

If you place an order, make sure that you do it by 2 pm EDT so that it is shipped on the same day and you do not have to wait for an extended period.

If you place an order after 2 pm EDT, the order will be shipped on the next business day.

Items will usually arrive at your gate within 2-5 days. Due to COVID-19 restrictions, there might be some delay in processing the order. However, Patience is key.