Here’s Who invented Crop Tops & Why!

The history of Crop tops is intermingled, and there’s no one nation that, out of nowhere, rose in the ranks and invented this style.

Crop Tops is the culmination of a series of events that piled up to end up into such a masterpiece that maintains its vibe even to this day.

Those who don’t know, let us briefly discuss what we mean by a Crop Top. 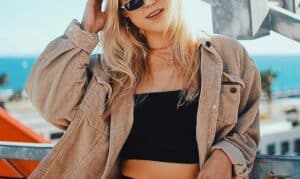 Basically, it’s the style in which the midriff, or the other way said, the abdomen is exposed in the outfit.

You must have seen celebrities wearing such outfits at events, and that’s precisely what a Crop Top looks like.

But the question still remains, who is it that invented the Crop Top, right?

As said earlier, a series of events have shaped its history and no one country can claim the authority or the invention of this particular fashion style.

The origins were found in the eastern part of the world. The logic it’s backed by makes absolute sense.

The thing is, the east part is a bit warmer or higher on the temperature scale than the western part.

The need would definitely have birthed in the eastern region because, in the west, the temperature usually doesn’t allow anyone to even think of wearing a crop top or naked-belly wear.

Are you familiar with the Indian Dramas or Movies and the “sari” style there? A large piece of cloth is wound around the body, leaving the abdomen naked.

That’s how it all started. The base they stood upon had been strong enough to last the ever-changing fashion industry.

Even now, In India, women wear these saris, one of their prime outfit designs.

The fashion then was replicated in Egypt and embraced with both hands wide open. This paved its way to mark its foot there in the USA, Canada and Europe.

In 1893, a performance was recorded wearing a bedlah – sort of a crop top in front of the Chicago crowd for the first time. This was back in 1893. 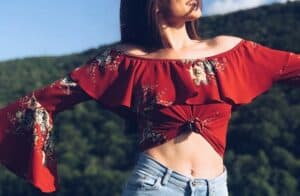 During World War II, there was a dire need to keep up with the raw materials available.

Designers had to design outfits that used minimal material yet looked incredible.

That’s been a challenging thing to practice. Before that, it was mostly the Indians who had saris in their culture.

This was a chance for the western world to bring crop top in and popularize it. And so was done, and designers did remove the midriff part designing the first crop top.

Once it came in, the culture never threw it away. So, if we had to answer what one event changed the history of the Crop Top, it would be World War II and the loss of supplies.

Later, fashion made its way to pop culture; since then, it has never looked back.

The style now is so in that you can’t even imagine how non-receptive people initially had been to these designs because the majority thought it over-exposes the body, and that better not be done.

All you have to do is put your skirt on with the crop top, and you’re all set to go anywhere you like. 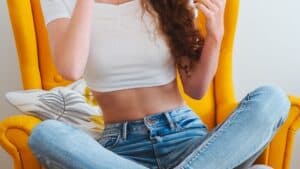 It’s easy-going, doesn’t demand much effort, and is easy to carry and that’s one of the reasons it’s still alive.

Otherwise, it would have died like many other design innovations of the 1900s.

To cover it all up, the design was invented back in the 1940s during World War and evolved down the road.

Now, it has its paws firmly caught in the pop industry, and traces are still found in other cultures around the globe.

Were Crop Tops made for guys?

Originally? No! Crop Top was never meant for guys, but it’s later that men found these outfits convenient and many 90s movies presented on-screen how men could take advantage of such styles.

We’ve stressed how Indians set up the base for Crop Tops with their saris and the fashion revolutionized with the time to arrive at its current shape.

Today, it’s YES they are worn by men too.

While some believe it was men who it was created for in the first place. Seeing the origins of the dress code, we find it hard to believe this notion because the sari thing strongly contradicts the idea they back. 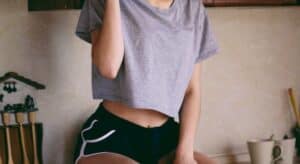 Back in time, bodybuilders used to put such crop tops on to avoid going shirtless in public, that kinda gave them a soft corner.

Or it could just be that way to expose the abdominal part to brag around with the abs, no? This can be a possibility that does hold some weight.

In a nutshell, I’d summarize the discussion we’ve had over the Crop Top, it took off back in the 1940s, and it was the 1970s when it garnered much traction and acceptance.

From its origins, we conclude it must have initially been made for women because it’s the women who wear the sari – the apparent roots of the Crop top.