One of the most well-known and ancient mythical emblems is the serpent or snake.

The twin expressions of good and evil are represented by snakes, which have been a part of some of the oldest ceremonies known to humans.

Serpents and snakes have long been used to symbolise the creative life energy.

Snakes represent rebirth, transformation, longevity, and healing since they peel off their skin.

Additionally, they are regarded as being inherently protective of sacred locations or artefacts that are difficult to relocate away from danger.

Snakes have been increasingly used as inspiration for clothes line and snakeskin is a popular medium in making handbags, belts and other accessories.

Here are some brands with snakes as their logo. 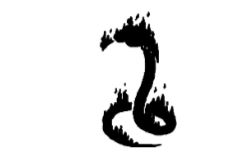 A streetwear company called The Snake Hole is situated in Melbourne, Victoria.

The Snake Hole was organizing concerts and art exhibitions long before it was a recognised name.

It was primarily an art gallery and studio designed to promote emerging artists.

The clothing swiftly overtook the modest runs of T-shirt prints that were created to go along with various art exhibitions, and since 2016, the label has been privately operated by creatives.

The brand has gone a long way from its origins operating out of the backside of a cargo container and a basement to now having a warehouse and a small workforce.

All clothing is produced ethically using carefully chosen textiles in small, limited runs rather than being bulk produced.

Their collections focus on art-based graphics and distinctive cut and sew clothes and are produced utilizing their own proprietary 100% cotton tees.

The Snake Hole functions as a creative outlet without restrictions, beyond a name.

You can view their collections here: https://thesnakehole.com/

Joseph Aaron Segal, who was a contestant on Project Runway Season 11, established the Pretty Snake brand in 2009.

The notorious “Crazy Kitty Sweater” gave birth to the company, which has expanded ever since.

The Pretty Snake collection, which is distributed by larger stores Urban Outfitters and ModCloth as well as boutiques all over the world, is renowned for its creative textiles and distinctive prints that become “viral.”

The Pretty Snake store was loaded in the days before the premiere with fresh designs of cat knitwear, leggings, T-shirts, and accessories—heaven for all cat lovers out there.

The company now carries a wide variety of patterns, including cats but not exclusively.

You can shop the line at: https://prettysnake.com/

Through their luxurious and distinctive jeans, Snake & Dagger weave together denim stories from all around the world, showcasing the pinnacle of Japanese craft and London attitude.

Each pair of Snake & Dagger selvedge denim jeans is meticulously crafted using the finest Japanese selvedge denim, which is known for its rich colour and opulent quality and was developed by London-based designer Roy Westfield.

A variety of artisanal techniques are used on the cloth to get the superb denim’s realistic, worn-in feel. The subtle hand application of each rip, fade, and paint splatter ensures that no two pairs are precisely alike.

The company originally went on sale in 2010. Years later, the collection is being reintroduced with eight superb pieces that are split across three distinct fits.

Roy created an extremely cool Airstream land boat, known as the Snakestream, to market the collection, and he began construction on it in 2016.

Because he couldn’t afford a shop or showroom, the idea for the Airstream came to him. It was a very clever and attractive solution.

He also has released a short movie titled “The art of making jeans”.

You can shop them  here: https://snakeanddagger.com/

Work clothing is crucial. Your company’s image is reflected in what your personnel wear.

Additionally, the fabric and style of their attire affects their level of comfort and, in some situations, their capacity to do their duties.

You may get the workwear you require at Cobra Workwear, whether you simply want polo shirts from a dependable clothing brand that consistently produces high quality clothes or you need to protect your staff with PPE.

You can choose from several clothing lines from Cobra Workwear that suit all of these requirements and many more.

They can fulfill all of your workwear needs when combined with their personalization options, which include embroidered and printed logos.

You can view their clothes here: https://www.cobra-workwear.co.uk/