When members of a massive community adopt the elements of a smaller and less influential ethnicity, without understanding the sentiments related to them, it’s called cultural appropriation.

There are many other hairstyles, clothes, dances, and jewelry articles that fall under culture appropriation. Are nose cuffs one of those? Let’s find out.

What is the history?

The history of nose cuffs is quite intriguing.

It has been around for the last 4000 years in the Middle East. Around this time the Bible was also revealed and has a mentioned nose cuff.

The Bible in Genesis 24:22 talks about Abraham’s son, Isaac finding a wife for himself and gifting her Shanf (nose ring) as the wedding gift. 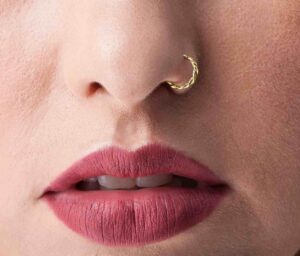 Later, the nose cuff found its way to India when Mughal Emperors took over the country in the 16th century. The nose cuffs gained popularity in India and became part of Indian culture.

In India, women about to get married still get their noses pierced as a sign of submission.

The nose ring is also believed to relieve the pain of menstruation and childbirth.

After India, the nose cuff tradition traveled to Africa. To this day, the African nomads of the Berber and Beja communities wear nose cuffs.

The women from the Tibetan tribe Apa Tani also wore huge nose rings to protect themselves from the prying eyes of other men.

Europe got introduced to nose cuffs in the 19th century. . Ethel Granger, born in 1905, became extremely popular in Europe for her contemporary piercings. Especially her double nose cuffs.

The South American tribes saw nose cuffs as a physical representation of one’s power and status.

The prominent figures like Lord Ajpop of the K’iche tribe wore nose rings to show his power.

In 1913, French singer and actress Polaire, famous for her unique style stunned the American audience on her tour by adorning a nose cuff.

Though Americans loved her style, the nose cuffs remained foreign to Americans for the next 50 years.

In the 1960s, the hippie culture rose in the United States and its supporters began wearing nose cuffs.

Some hippies even traveled to India, as they believed that, unlike Americans, Indians would accept them as they are.

Later many well-known celebrities also started wearing nose cuffs for their exotic appearance. This was when nose cuffs became acceptable in the west.

Today, nose cuffs have become extremely popular amongst men and women all around the world.

While some see the nose cuff as part of their culture, others see it as an exotic piece of jewelry that enhances the appearance.

Is wearing a nose cuff offensive?

When the nose cuff made its way to America, hippies saw them as a way to show defiance of the norms.

Their desire to look rebellious and different pushed them toward wearing nose cuffs.

Goths and punks traveled to India to get their nose cuffs.

This act was extremely offensive as Middle Eastern and Indian people see nose cuffs as an important part of their culture. 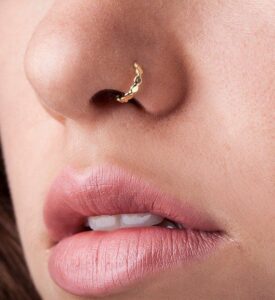 In India, a nose cuff is believed to suppress the pain of menstruation and childbirth.

In the Middle East, men gift nose cuffs to wives on their wedding day. They see it as a way to secure their wives financially, in case of divorce or sudden death.

African tribes see nose cuffs as a symbol of status and wealth.

So, a piece of jewelry that holds so much significance for people, must not be worn to show rebellion or defiance.

Similarly, wearing a nose cuff to modify your body is also offensive.

Is wearing a nose cuff rude or disrespectful?

Many big brands like Givenchy have launched nose rings for women and men. Models have also ramped the walk by wearing various types of nose cuffs.

Nose cuffs are not rude or disrespectful as long as the person wearing them does not have bad intentions. 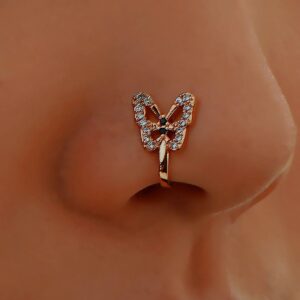 Considering the value it holds for communities around the world, wearing nose cuffs must not be seen as a way to rebel against society.

The nose cuff must not be seen as a body modification tool either.

What is the right way to go about it?

It is impossible to please everyone in the world. Some people might get offended even by the way you breathe.

So, if you wish to get a nose cuff first thing you need to do is understand that not everyone will approve of it. 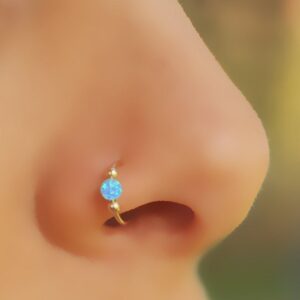 Some people of color may give you a disgusted look for wearing it. But, if in your heart you have pure intentions, there’s no need to hide from such people.

Secondly, you need to keep the nose cuff’s significance in your mind. It might be just a cool look for you but other people’s nose cuff is a crucial part of their culture.

Lastly, do not wear a nose cuff just because you want to defy your parents or norms of the society. Always respect people and their culture.

If short, a nose cuff is not a cultural appropriation if you wear it with pure intentions.